Nowruz, Iranian New Year, has got deep roots among ancient Iranians, particularly farmers. As their lives depended largely on agriculture and producing food, it has got strong connection to such lifestyle. You need to know Nowruz history and roots of Nowruz Celebration to understand it better. 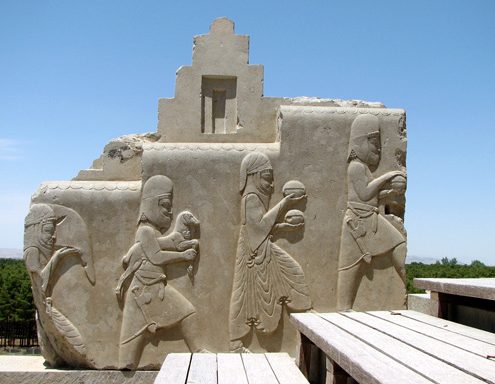 Preparing for Nowruz Celebration in Persepolis

When no agricultural activities were possible in Winter, each individual used to go home and try to keep warm on his/her own. The end of Winter and beginning of Spring, when it got warm again and the people, most of whom were farmers, could get out and come together for work and produce food, the time for togetherness started. This could be a solid reason for Nowruz celebration!

According to the ancient myths, when Iranian mythological king, Jamshid, ruled in Iran for 1000 years, everything was good. Food was abundant, lies didn’t exist, plants didn’t go dry, people didn’t suffer from extreme cold and hot weather conditions, nobody got old, jealous, etc.

During such time and at the beginning of first day of the first month of Spring, Jamshid sat on his throne decorated with gems and put on a crown encrusted with jewels, against the East. When the Sun started shining at him and the throne, people saw him glittering like the Sun. Therefore, this brought plenty of happiness and joy to the nation. They celebrated that day and called it a new day, Nowruz. The happy ceremonies took five days and everyone celebrated the New Year and the revival of nature.

Since 3rd millenium BC, Nowruz was commemorated with joy in Iranian plateau, but not in the Eastern half of Iran. At the same time, it was celebrated in the Mesopotamia. Nowruz history doesn’t originally go back to a Zoroastrian nor an Aryan tradition. 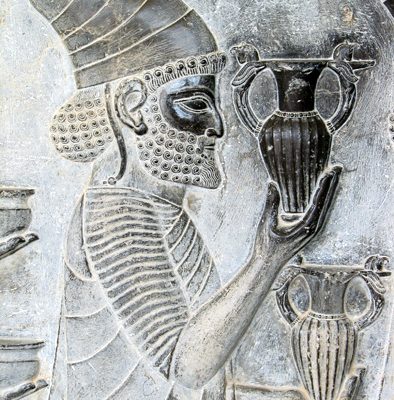 There was another festivity popularly celebrated after the time of harvest around early November. During that time, Iranian calendar had 7 months of Summer and 5 months of Winter. Mehregan was at the end of Summer and the beginning of Winter. The cause of joy was the crops harvested, meaning food for people.

Nowruz and Mehregan were celebrated in several other adjacent countries. For example they were popular among Semites, Arabs of Medina, etc. These annual celebration have continued till now in various countries.

When you study Nowruz history, you find out it wasn’t a Zoroastrian festivity, because Avesta, the holy book of Zoroastrians, hasn’t mentioned it. On the other hand, it wasn’t celebrated at the Eastern half of Iran, where the main concentration of Zoroastrians used to live. One fact is for sure: Nowruz was celebrated in Persepolis.

In Achaemenian era, people and officials commemorated Nowruz in form of an annual tradition everywhere – at home and in Persepolis. Some researchers believe that during early Achaemenian era, Mehregan was celebrated in Fall, but under Darius I, the beginning of Spring was determined to be the time for the annual festivity in Persepolis.

The Persian king was sitting in a particular direction and specific spot in Persepolis so that daylight could shine at his face at sunrise. This is why Persepolis is known as the throne of Jamshid and Iranians call it Takht-e-Jamshid.

In Parthian and Sassanian eras, various calendars caused the day of Nowruz to move to other days as the calculation for different calendars were not the same.

Iranians continued celebrating Nowruz even after Arabs’ invasion, which brought Islam to Iran. Arab caliphs weren’t happy about this at all, but Iranian Muslims kept on honoring and celebrating their national rituals.

Under Seljuks, when Turk authorities were very much against Nowruz festivities, Iranian calendar went through several manipulative changes. Eventually, a group of mathematicians were assigned a project to correct the calendar including Omar Khayyam. They fixed Nowruz time at the beginning day of Spring, almost the same as 21st of March, when Iranians celebrate Nowruz these days.

When Safavids ruled in Iran from 16th to 18th centuries, Nowruz celebration was mixed with some Islamic rituals. Religious leaders narrated traditions from Imams to approve that the prophet Mohammad and others did great things at such a day. Therefore, today Iranian Shiites celebrate Nowruz as an annual Iranian-Islamic event and even recognize it as a holy and blessed day.

Customs and Traditions before Nowruz – Part 2Get to Know the Life under the Skin of Iranian Bazaars
Scroll to top
Need Help? Chat with us
Start a Conversation
Hi! Click one of our member below to chat on Whatsapp
The team typically replies in a few minutes.
farzaneh
Incoming Department