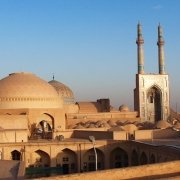 Yazd, as one of the most vicious cities in Iran, has special cultural and religious characteristics.
This city, which has recently entered the UNESCO World Register, has a peaceful coexistence among followers of its monotheistic religions.The great religions of Islam, Judaism and Zoroastrianism have lived together for hundreds of years ago and respected each other’s beliefs.Yazd enjoys a high status among Iranian cities in view of its cultural and social history.
“Yazd’s culture has been deeply concentrated in ancient Iranian culture and focuses on engagement, peaceful coexistence, acceptance of differences, and respect for commonalities between different groups.”
The head of the Central Zoroastrian Association in Yazd province said: “Freedom to hold religious ceremonies is a sign of respect for the beliefs of various religions in Iran.
He also added that the presence of a Zoroastrian representative as a representative of religious minorities in the Islamic Consultative Assembly is a sign of respect for the rights of the religions and the system of the Islamic Republic of Iran.
Kourosh Niknam, a former Zoroastrian representative in the Islamic Consultative Assembly, said: “Over the years, Zoroastrians and Muslims of Yazd have worked together to build this city together.
In fact, the city of Yazd is a symbol of peaceful and successful coexistence of religions alongside. This city is a common heritage of all the Iranians, and its global record is an opportunity to pay more attention to this city.”
Yazd has placed magnificent effects of the Iranian architectural heritage.You can see the largest and best historical works of Iranian bricks in Yazd.To see these unique works, the opportunity should not be lost
Yazd people will host you on this tour